PREVIEWS Flips with New Updates in April, May Issues 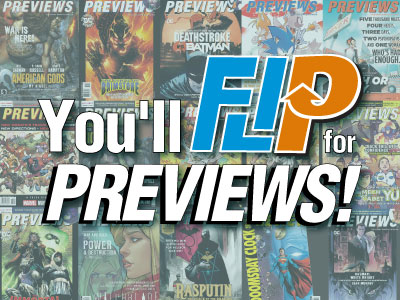 Diamond Comic Distributors, the largest distributor of English language comics, graphic novels, and related pop culture merchandise, has announced that it will be making several changes to its PREVIEWS magazine with the April and May 2018 issues.

In the April edition of PREVIEWS, retailers and consumers will see a new combined section for print merchandise, as prose books and magazines will be merged with comics and graphic novels to create a larger print section, titled “Comics, Graphic Novels & Print.”

Following the new “Comics, Graphic Novels & Print” section will be the return of a “Manga” section, added as a result of the resurgence and growth of the genre. The new section rolls out at the same time PREVIEWS features “Manga Month” as its April catalog theme. Accordingly, the April issue will feature an essential list of manga titles for readers to pick up, interviews with manga creators, as well as a backlist stock-up sale for retailers.

Additionally, starting in April, the toys and merchandise sections will be flipped with the PREVIEWS back cover. All information regarding toys and merchandise, including new products from premier toy vendors like Diamond Select Toys, DC Collectibles, and Eaglemoss, will be easily accessible by flipping the book over and starting from the back cover.

“For PREVIEWS readers, that means you’ll receive a copy of PREVIEWS, DC PREVIEWS, Marvel PREVIEWS, and the Image Plus magazine—all for the price of $3.99!” commented Grosser.

"For PREVIEWS readers, that means you’ll receive a copy of PREVIEWS, DC PREVIEWS, Marvel PREVIEWS, and the Image Plus magazine—all for the price of $3.99!"